Two nights before the rest of the Bocas crew showed up in Playa Venao, Lynn, Gonzales and I made friends with some natives. More people pitched tents on the beach, and the tent next to ours housed a few Panamanian guys. They had fancy commodities, like air mattresses and sleeping bags. They even had a truck. The most extravagant thing we had was Gonzales's Mexican blanket. We were still peeing in the ocean and eating whatever scraps of food we found in our tent. 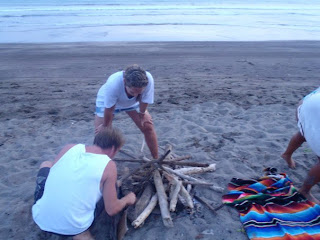 At night, we built bonfires. By we, I mean primarily the Panamanians. I watched. I learned all kinds of things. I learned that lighter fluid exists in developing countries, "Que tal?" means "What's up?" and that there were cops everywhere. The cops weren't looking to arrest us or anything, they just stopped by the bonfire to say hi. They also looked for elicit acts. They just wanted free, live porn.
Lynn liked her men foreign and exotic. I liked my boys white. Lynn was hooking up with a Chilean man on the beach when she noticed ten flashlights shining on her and the man. There was nakedness. They were surrounded by cops. When the cops told them that they needed to move their amorous actions to the bushes, she responded, "Prefiero la playa." When the cops continued standing over her with their flashlights, she announced, "Prefiero la playa." When she walked away from the cops, she screamed "Prefiero la playa!" shaking a fist in the air. She didn't want to move to the bushes, she preferred the beach. 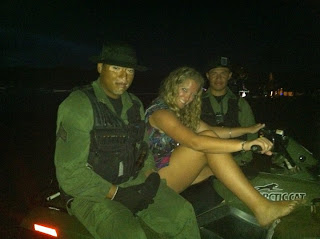 A few nights later, the Kiwi and I were hooking up on the beach when we were similarly surrounded by cops with flashlights. There was nakedness. Though I was tempted to yell "Prefiero la playa," I settled with taking a picture on their ATV instead.
That night, Lynn, the Kiwi and I slept in the tent. The Kiwi molested Lynn's breasts. I was just sad that I didn't have a pillow.
Posted by Kara on 7/20/2011
Email ThisBlogThis!Share to TwitterShare to FacebookShare to Pinterest
Labels: Central America=Coke and Craziness